Cars and Crafts has been one of our favorite shows since they started the monthly summer series. Their June 2019 show was no different, the quality of cars, the quality of the crowd and the location, were all batting 100. It seems all too often that an excellent show series exists for maybe a season or two then disappears, either they grow too big or the crew dissolves. It’s clear to see that Drive Cartel has no plans to go anywhere but up and their crew has the talent to take their shows as far as a show can go. 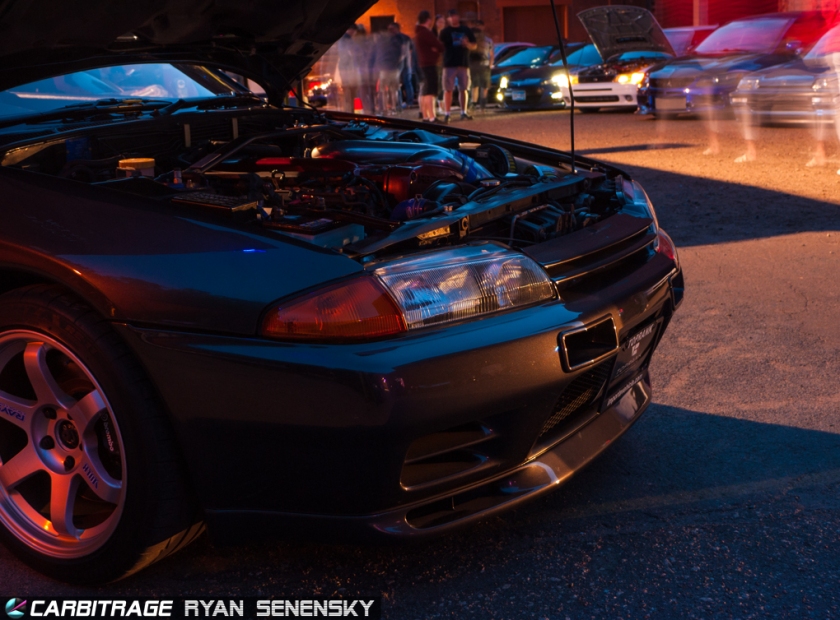 Cars and Crafts has been one of our favorite shows since they started the monthly summer series. Their June 2019 show was no different, the quality of cars, the quality of the crowd and the location, were all batting 100. It seems all too often that an excellent show series exists for maybe a season or two then disappears, either they grow too big or the crew dissolves. It’s clear to see that Drive Cartel has no plans to go anywhere but up and their crew has the talent to take their shows as far as a show can go.

The only issue is that as the show went on, people began to taper off and Drive Cartel had to scramble to fill holes in the lot. Of course this wasn’t something that Drive Cartel could have planned for and they handled it really well. If this show was held at a massive location, like Canterbury, it wouldn’t be as much of an issue because 5-10 cars leaving out of 200 cars really isn’t a big deal, at a show of 40 cars or so, then it is suddenly 25% of the show that has left. Drive Cartel does a wonderful job of replenishing cars but they can only plan for so much. There ends up being half a dozen spots open in the show while cars like this S13 are still rolling into spectator parking.

There were tons of cars that could have used those spots and many of them did. In a brief stroll to get my tripod, I spotted a really well built TRD kitted T230 Celica, Wa Lee’s unbelievable CE1 Accord, just about every Evo 8-9 in the state and probably the coolest E110 Corolla I’ve ever seen in my life. Most of these cars weren’t perfect but some were totally worthy of sitting in the main show and, although Drive Cartel was able to track down a few of the owners, most of these just sat in spectator parking until the end of the show.

With the exception of people leaving so early, the show was excellent. Somehow Drive Cartel is able to get unique cars to come out of the woodwork, the regulars were there but there were also some builds I had never even seen. Those regulars to the Cars and Craft series had some pretty noticeable improvements as well. That’s the unique thing about the midwest versus places like the west coast, we get these massive changes to cars where as in California, you might see a different lip, then a different set of wheels and it just seems like watching paint dry. 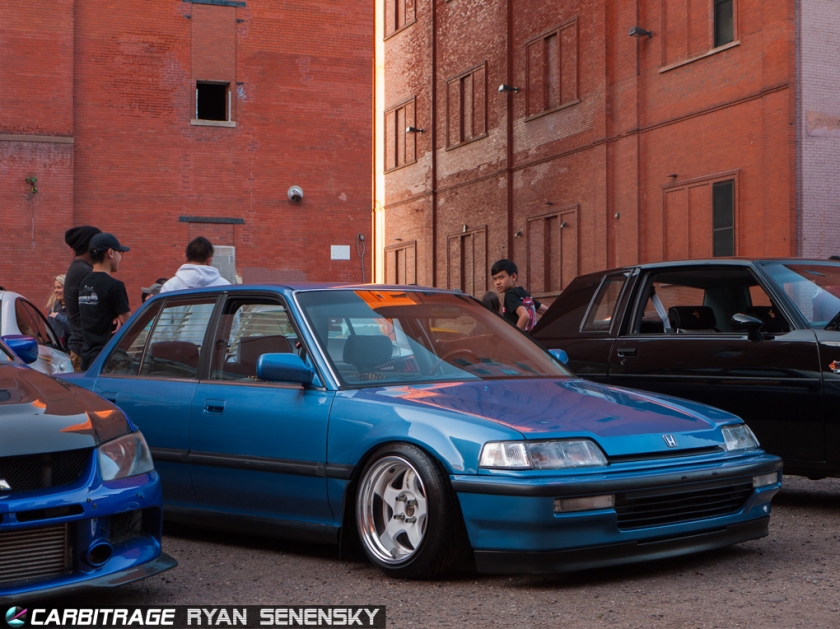 A perfect example of this is Tony Yang, one of the admins over at the MNEF club, who has one of my favorite cars in Minnesota. His EF sedan build has been a slow build over the last few seasons, but I honestly prefer that over these cars that are assembled over a winter, come out and kill it for one or maybe two seasons before disappearing off the face of the Earth. For 2019 Tony has added clear tails, a paint matched center garnish and some really mean Work Meister S1 2-piece wheels that really set his car over the top. Maybe a 5 speed swap with a B17, or something goofy like that, will be next.

Brian Jannusch of Top Rank, another Drive Cartel regular, brought out his latest R32 GT-R for sale. A rare halogen headlamp equipped model with an R34 engine swap. The R34 RB26DETT may put out the same amount of power as the R32’s original RB26DETT did, but it does so in a much more reliable and consistent manner. More importantly, it was equipped with a set of hyper rare TE37 wheels with a rose gold finish, naturally Jana lost her mind when she saw this. With what seems like half of the R32 GTRs ever made already in the United States, unique variants like this are what is needed to set the cars apart. 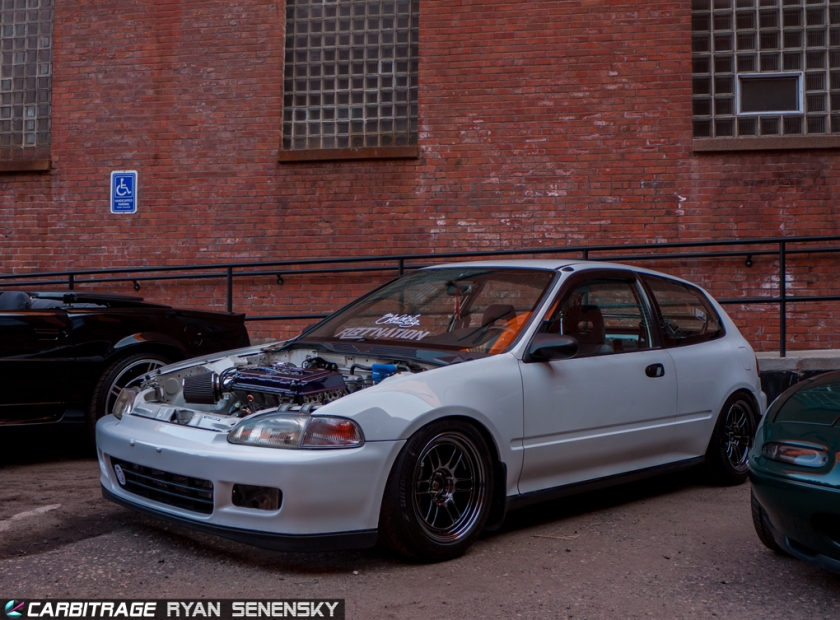 This EG Civic was one of my favorite builds on this chassis in Minnesota in a while. It’s a simple build as it takes the standard Honda formula with a gutted interior, JDM bits and an engine swap but it puts them together into an excellent package. EGs used to be swarm meets like mosquitoes in Minnesota but after 30 years of rust and theft, what were once thought disposable are now fetching nearly the price they were sold for when new. It is good to see them at shows though, there hasn’t been a subcompact that nailed it this well since the 96-00 generation Civic was discontinued.

Speaking of cool subcompacts, this Leyland Mini Clubman was a great example of one of the rarest Mini variants. Complete with Lucas electronics and the 1969 facelifted front end, I couldn’t help but fall in love with the little car. These cars are a rabbit hole of interesting variants, maybe we will talk about them in a future article. 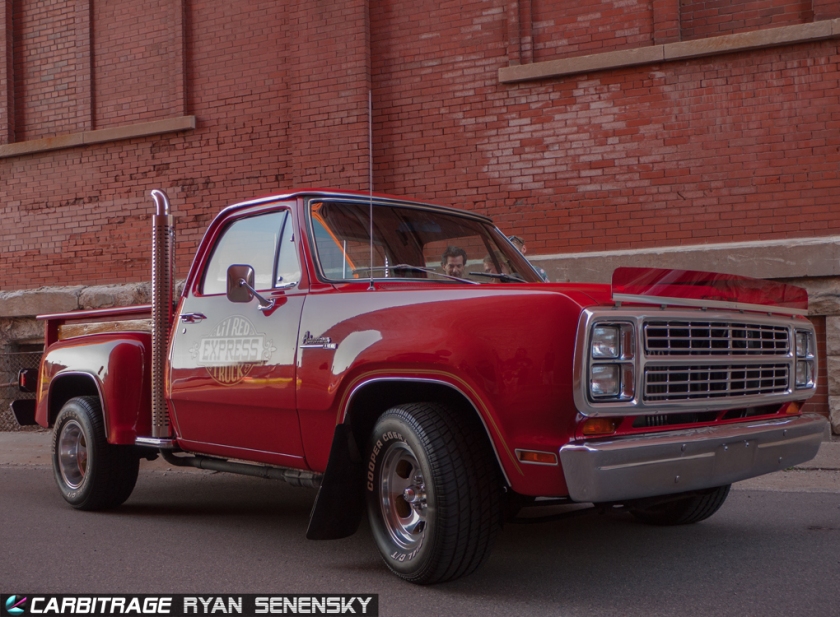 There were a lot more American cars in show this time than usual, a couple of donk Camaros and Mustangs were in the show for its entirety. The coolest American car, and likely coolest car outright, wasn’t even a car, rather it was this Dodge Lil’ Red Express truck. Fun fact, this was actually the fastest American vehicle from 0-100 MPH when it was for sale in 1978. Dodge took the muscle car formula and put it into a truck since there was an emissions loophole that didn’t force catalytic converters and EGR systems onto trucks back then. 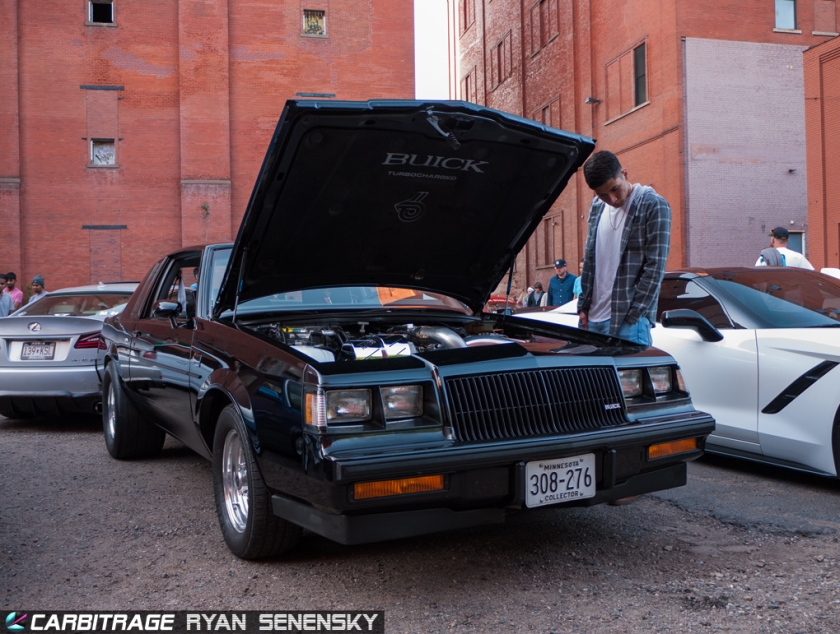 Keeping on the topic of fast American cars, this Grand National was at the show. It looks like just about every Grand National ever made but this one used to be one of the quicker street cars back in the day, I’m glad to see that it’s still around. Of course here at Carbitrage we would never condone street racing, but if a tree falls in a forest and no one is around to hear it, does it make a sound?

Last year I spotted this S30 at Cars and Crafts but I wasn’t able to get any reasonable pictures of it due to a consistent 14 person mob around it. I usually hate V8 swapped S30s but the Mad Max bug catcher, twin carb setup and HUGE old school roots supercharger make this look like something that could have been in that first Mad Max movie, which is shorthand for absolutely positively rad. It also has that 70s muscle car rake to it with raised letter tires on some steel oval track wheels which really drive the whole look of the build home.

Blake Hummelgard’s Miata came out with a few small improvements this year, it didn’t really need anything except he finally got a color matched hardtop. This car is a great example of how to build a Miata. It’s purposeful but with enough flare that it doesn’t blend in with the other 1,000,000 Miatas on the road. 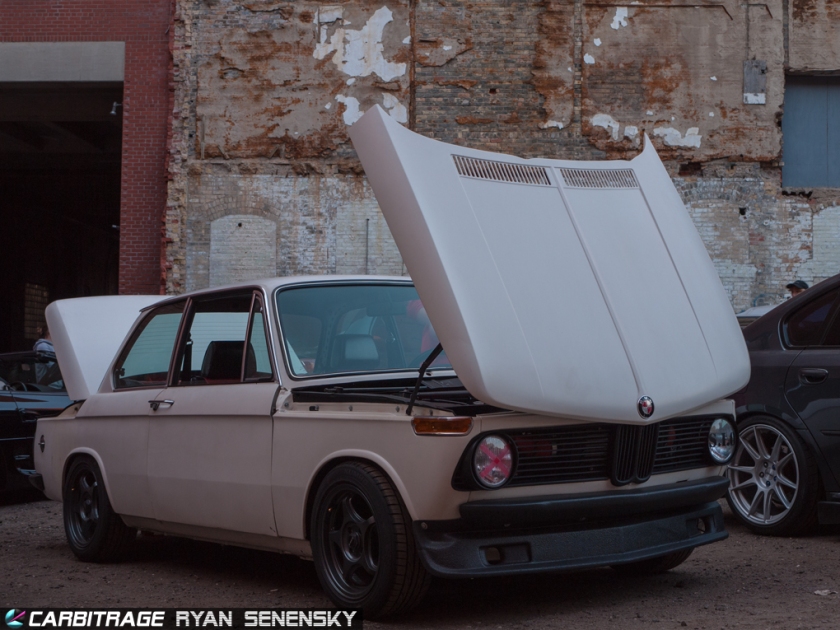 This SR20 swapped BMW 2002 has been around for a few years now, it’s cool to see it shows catering more to the import community. It seems like for the first few years, the only place that I would see it was at muscle car shows like Street Nationals at the State Fair Grounds. The 2002 is up there for one of my favorite European chassis of all time. 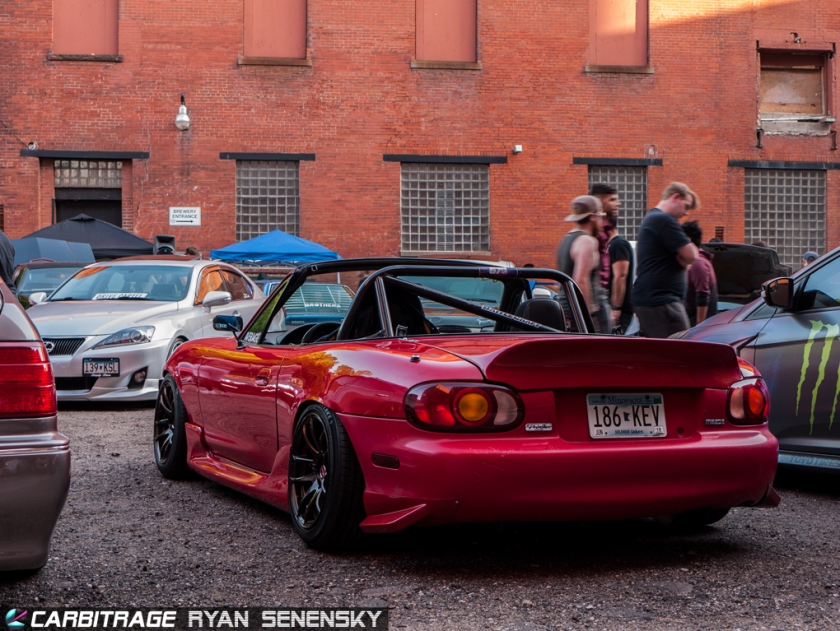 John Krueger and his husband Patrick now have twin Miatas, while Patrick has a Rocket Bunny widebody on his, John is rocking a seriously cool old school Bomex kit. John and Patrick have always built some really cool cars and I’m excited to see this Miata as John builds it. Part of me wishes we could fast forward like 5 years until early 2000s bodykits make a full comeback but I also want to start perusing Craigslist to find still intact kits and start hording them for when they go up in value.

This VIP Lexus GS400 doesn’t have the best picture ever taken, I have to apologize for that, but when I first saw it during the daytime I didn’t think it had anything fresh done to it. Then at night, I took a closer look and noticed that I was sorely mistaken.

Look at that headliner! LED lights embedded in the headliner to look like a night sky. Usually I think VIP cars are a bit much and yet all too cookie cutter at the same time, then I see something like this and have to throw my hands in the air and say that I was wrong. I wonder if this is based off any actual night sky star map, where is Neil DeGrasse Tyson when I need him?

Drive Cartel continues to have the best shows in the state of Minnesota, everything they manage to produce is world class quality and could compete with anything you find in California, Chicago or down south. If you haven’t had a chance to go to Cars and Crafts, you’re missing out, check out the next show July 6th at Saint Paul Brewing.