Today cars from the 80’s like these are getting their legs in the larger collector market. For someone who wants an 80’s era GT car that has an inline six and has been thoughtfully designed to be a 2+2, it’s extremely hard to look past the MA61 Celica Supra. Yet not everyone is familiar with the Celica Supra, we have to ask, what’s the deal with the Toyota Celica Supra?

We are partnering with Back to the 80’s for a series about iconic cars from the 1980s, these will be longer form versions of the short descriptions on the Back to the 80’s- MN facebook group. To find all of these posts search for the BTT80s tag on our site.

Back when I was a teenager playing Gran Turismo 4 and Forza Motorsport 2, I discovered a beautifully boxy 80s sports car called a “Celica Supra”. For years I had longed for one and I finally when I was 18, a 1985 Toyota Celica Supra P-Type ended up in my parents driveway. It immediately got gapped by a BB6 Prelude in a street race, then it developed no shortage of electrical issues and I eventually sold it at a loss. With the exception of one random Hmong guy in uptown who was gleefully unaware of how terrible it was, everyone thought I was a lunatic for buying that car. They might have had a point too, that was a truly terrible car. Plus retro-80’s cars weren’t en vogue yet outside of the Japanese classic car community, so it was completely stagnant in value, however I loved that car regardless of how stupid it was. 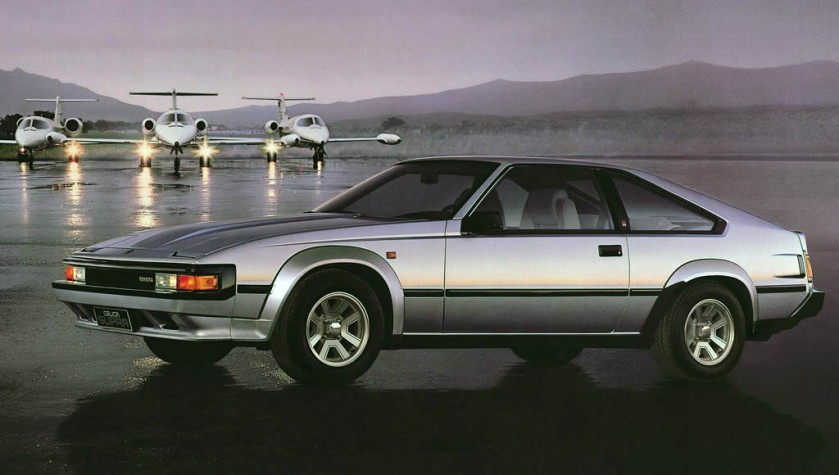 Today cars from the 80’s like these are getting their legs in the larger collector market. For someone who wants an 80’s era GT car that has an inline six and has been thoughtfully designed to be a 2+2, it’s extremely hard to look past the MA61 Celica Supra. Yet not everyone is familiar with the Celica Supra, we have to ask, what’s the deal with the Toyota Celica Supra?

The first question, inevitably will be, what’s with the Celica Supra name? Wasn’t there the Celica AND the Supra? If you’re sensing a “yes, but…” coming then you’re correct. Yes, there was a Celica and, yes, there was a Supra but the Supra was originally a sexier high displacement GT cruiser variant of the Celica.

This all started in April of 1978 when the A40 generation of Celica needed a GT variant to help it move up market. While Datsun had moved from the sports car S30 280Z to the hefty S130 280ZX GT car, and even Honda had a Prelude that it was developing that would appeal to both sports car fans and GT car fans, the Celica was still very much so a sports-first car. Needing a GT car to compete, Toyota made the most 1970’s vehicle they’ve ever made. 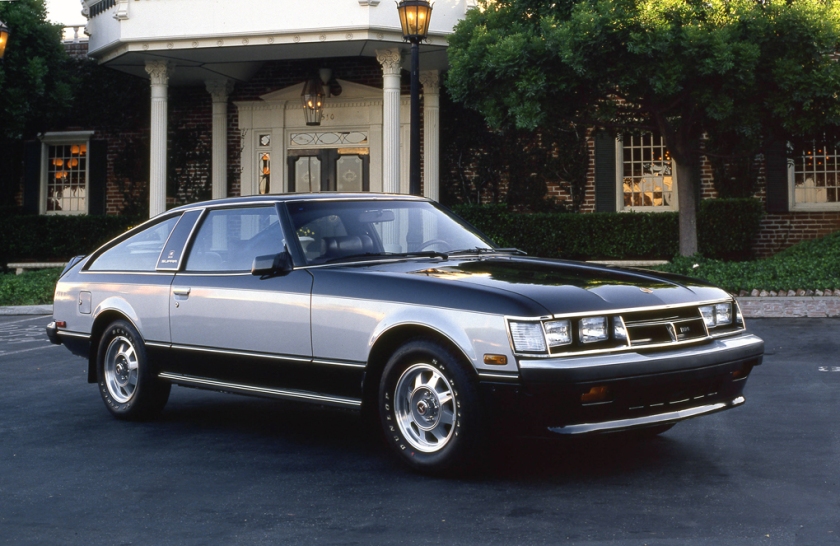 Toyota took the Celica liftback, stretched the front of it to be just over 5 inches longer and placed an inline 6 under the hood. The specific engine they used changes between markets, the Japanese market got the 2.0L M-EU engine and we received the 4M-E, regardless you weren’t seeing much more than 120 HP out of either engines. It’s the malaise mind you, and regardless of what side of the ocean you were on, it was in full effect.

The sports package of course is the peak of malaise coolness. It added some spoilers and tires with raised lettering, but no additional power was found. Yes, the first generation Celica Supra wasn’t much of a standout performer, but to be frank in 1980 even a Corvette wasn’t much of a performer then, so it fit in perfectly during the malaise. Eventually by the end of it’s run there were some standout trim levels but the standard 4-cylinder Celica was still Toyota’s motorsport golden boy.

This doesn’t mean that the first generation Supra doesn’t have it’s appeal. Due to it’s living in the shadows of every other car to hold the Supra name, it is a great platform for Japanese classic car tuners to start shakotan projects with. It is also available for pennies on the dollar of most other cars of the mustache era and they’re as reliable as the sunrise.

This would all change, however, with the second generation Celica Supra in 1982. It launched with a 145 HP engine but eventually grew to 178 HP in American guise. Not only did it have as much power standard as the best of the previous generation came with but the new 5M-GE engine was purely a product of the 1980s. The wide valve angle cylinder head, timing belt driven dual camshafts and electronic fuel injection were on the cutting edge of technology for the era. The engine also featured variable assist power steering, while parking it would be lighter to steer and more responsive once moving.

Once the engine had sent it’s power to the transmission, it was met with either a 5 speed manual transmission or a 3 speed automatic transmission that was computer controlled and offered a normal power delivery mode or a power mode which allowed faster acceleration and locked the torque converter. Naturally, the manual was the one to get though. Once power left the transmission it then fed into another wonderful piece of technology, a standard equipment limited slip differential. 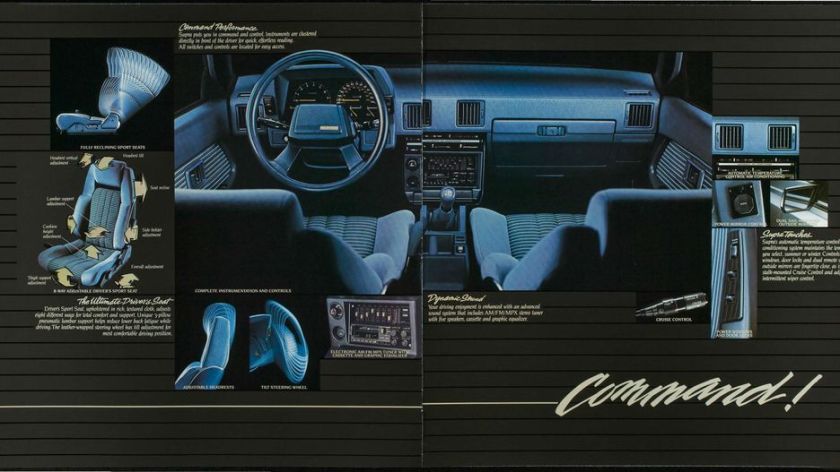 The powertrain wasn’t alone for being at the peak of technology in 1982, the car as a whole came loaded with a ton of tech for the era. 8-way manually adjustable seats, headlight washers, a 5 speaker stereo with graphic equalizer, handheld corded map light, automatic climate control and heated sideview mirrors came on the car. There was an optional trip computer that would calculate your fuel economy as well. Sure a trip computer is pretty simple but the additional features were the real wizz-bang tech of this option. You could enter the distance you would be traveling and it would tell you how close you were to your destination and give you an estimated time until arrival based off of average vehicle speed. In an era that predated GPS, this was the world’s first navigation computer. Now you could officially tell when you’re lost, the future was now.

While Japan got a litany of trim levels, in America it was much simpler, there were two body styles of the Celica Supra available. You could get either a narrow body L-Type Supra, meant to satisfy the Japanese-market size limitations but sold here as a more luxurious model or the performance orientated P-Type with an absolutely radical widebody added on. The P-Type Supra’s wheels were another marvel. While the standard L-Type wheels were a rather plain 14×5.5, the P-Type came with a girthy 14×7 or 15×6 wheel option. These still are on lists of the coolest factory wheels of all time. In 1982 though, a 225 mm wide tire was something to behold, even a Ferrari 308 GTB only had a tire that wide in the back.

The 225 mm wide tires were aided by a fantastic suspension setup as well, MacPherson struts sat at every corner with an independent rear suspension design. That design was aided in development by Lotus, just one of Lotus and Toyota’s many stellar collaborations. The suspension is just on this side of soft with your typical 1980’s era body roll, it is a GT car after all. While its comfortable, it still does handle exceptionally well for a car of the era. It can keep up in the corners with any of it’s competitors, yet still keep it’s composure over your typical terrible river road surface quality. As good as it is, there is a lot of handling left on the table for an enthusiast with a wrench. Stiffer springs and dampers, a lower ride height and a fat sway bar in the rear does wonders to tighten up the handling of these cars.

The engine also left performance to be unlocked, Japanese performance tuner HKS was able to get this engine to a rumored 600 HP and was able to surpass the 300 KPH (187 MPH) barrier soon after introduction in 1983. The power came from the same 5M-GE that you could find in any Supra but heavily modified. A balanced low compression rotating assembly was added with 2 mm wider pistons and the cams were switched out for a set of 300 degree units. The EFI system was ditched in lieu of a set of modified Solex 44 mm carburetors complimented by twin Garrett T04B turbos with an intercooler. 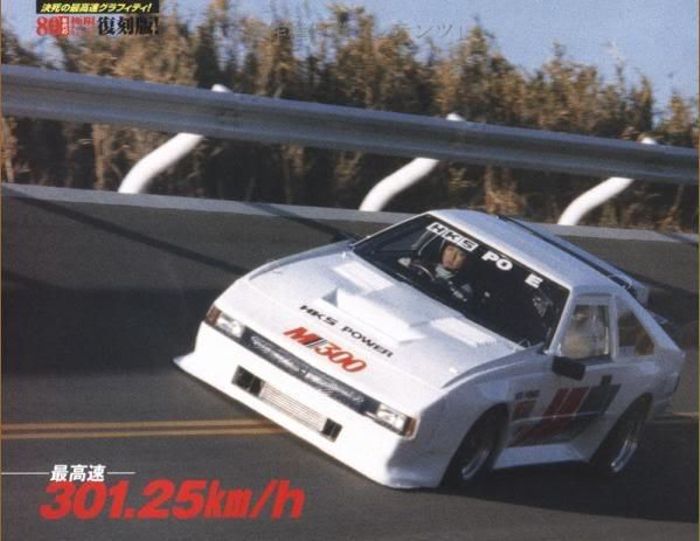 Once an aerodynamic body kit was added on, HKS took the car to Yatabe test circuit and laid down a scorching 301.25 KPH. To grasp the importance of how blistering fast this was in 1983, there had only been a single street legal car that was able to break 300 KPH at Yatabe prior to HKS. That was a heavily modified DeTomaso Pantera built by GA Mitsunaga with mostly NASCAR and Cam-Am parts. Yatabe has been the defacto speed testing facility for decades in Japan and this was the first time a Japanese make ever was able to achieve this speed.

The Celica that was the basis of the Mk2 Supra wasn’t a terrible car either. Power was supplied by a 22R-E 4-cylinder engine which, while slow, was endlessly reliable. The chassis came in hatchback or coupe form with ASC making convertible models under contract for Toyota as well. The headlights when turned off were flush with the grille but would move upright once turned on. This changed in the 1984 model year when the Celica got fully retractable headlights which really brought the front end of the car together. While the Supra was able to contend for touring car victories around the world, the 4 cylinder Celica also had a notable racing pedigree in group B rally racing with 6 victories at Cote D’Ivore and the Safari Rally and several other wins in lower classes. 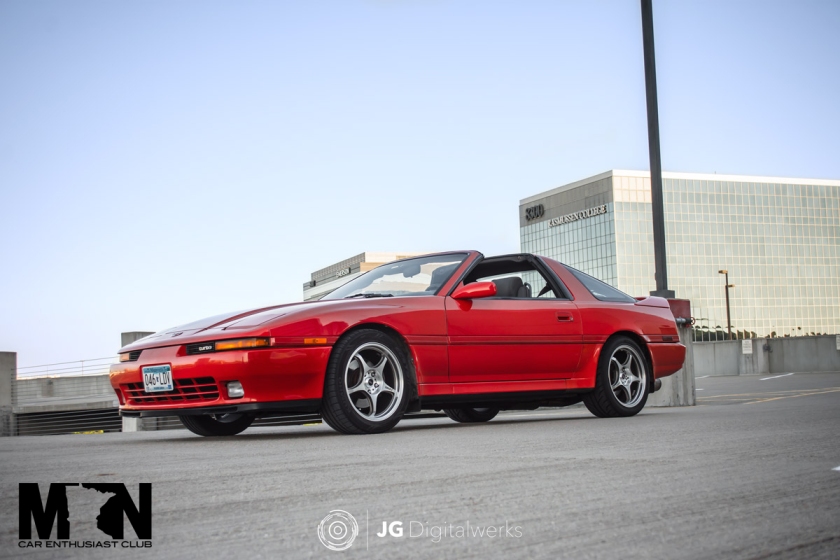 The Celica Supra name finally ended in the second half of 1986 with the arrival of the third generation Supra. That generation introduced the world to the Supra Turbo, the 7M-GTE’s 276 HP was able to blow away the old 5M’s output and it’s racing pedigree dwarfed the older NA car’s racing history in every way. It was everything the Celica Supra was and more, with a single exception, the 7M-GTE was marred by headgasket issues. These issues were from improper head bolt torque but once fixed, they’re stellar cars in their own right.

Today the Celica Supras are a bargain of a car, having been overshadowed by their turbocharged descendants since their conception in 1986. The Mark II Supra’s 5M engine and W58 manual transmissions are bulletproof reliable, even if they’re not the fastest thing in the world. If you need more power though, Toyota’s venerable JZ engine family swaps into the Mark II Supra with minimal effort. If you want to keep the originality of the car though, the standard 5M engine is completely adequate and you can still find plenty of vintage performance parts floating around on the internet from Trust exhaust manifolds to HKS turbo kits. Not that power matters though because with the amount of rear end squat you get when on the throttle, you will swear you’re going lightspeed so long as you don’t look at the speedometer.